Home / Team A3T: They’ll be back (and this year, no hack attack)

Team A3T: They’ll be back (and this year, no hack attack)

Team A3T is hoping to make something of a comeback at DroneClash on March 16th.  In 2018 their dreams of DroneClash victory were dashed. Instead of looping the loop and ducking and diving, the Aerobatic Twente Tech Team’s drones spiralled inelegantly to the ground. Crash! Their opponents’ surprise use of hacking had put a premature end to their airshow.

Bigger and better for DroneClash 2019

A year later and a whole lot wiser, the team from the Netherland’s University of Twente is back with a vengeance.  Boosted by five new team members, the team comprises Masters students hailing from India, Switzerland Syria and Sint Maarten, who are being mentored by DroneClash second-timer, Gabriel from Canada.

This bigger and better team looks to be professional in its set up. Tasks have been divided amongst the group according to individual expertise, with subgroups focusing on hardware, software and team promotion. Not to neglect the acrobatics, of course. Canadian, Gabriel, is a polished pilot. Although self-taught, he has many hours of flying practice, having joined FPV races  and worked as an UAV operator for a startup.

The team currently spends a minimum of 5 or 6 hours a week on the project, trying to squeeze in as much DroneClash prep time as possible, alongside their busy study schedule. For this is a team which is in DroneClash for the learning experience.

Radhika Kapoor, a Creative Technology student from Switzerland typifies the knowledge-hungry attitude of the team. She enthuses:

What about flying? Radhika laughs: “Yeah, flying is harder than it looks. First time I tried, I crashed!”

Luckily, good relationships with local industry mean that A3T can test their creations without having to travel far. They can just pop over the road to the grounds of a local fibre engineering company, Fiberneering.The same company is also supplying the team with materials. And quality materials are key to A3T’s strategy this year. By their own admittance, they are going for brute force. What that means in practice, they’re not saying, but it’s clear that carbon fibre and ergonomics will play a major part. 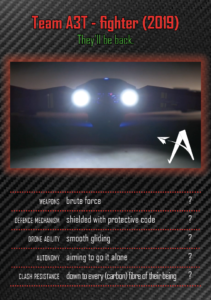 But just how A3T is defending against a repeat hack-attack, I’m not sure. Suffice to say that the team has invested time and effort in protective coding. In fact so confident are they that they won’t be hacked, that they are aiming for a bit of one-upmanship: namely autonomous drones.  I can’t wait to see that idea take off. Want to join me on March 16th? Book your tickets here.