Home / How to take down a rogue drone video | Drone vs. Tesla Coil

How to take down a rogue drone video | Drone vs. Tesla Coil

Drones prepare to do battle with nets, balls and a Tesla Coil at DroneClash 2019 (bright sparks included!)

How do you take down a drone? This is the question being asked at DroneClash 2019 next Saturday 16th March.

At this spectacular competition –  dubbed by the BBC as “a sort of Robot Wars in 3D” – the latest counter-drone measures will be tested to the limit. DroneClash’s latest video gives some clues as to the range and scale of challenges that await the nine international teams entering DroneClash this coming weekend.

The video depicts a series of increasingly extreme counter-drone measures from net guns to to ball cannons, each struggling to hit the target. Then the camera reveals a new idea: a Tesla Coil. Will the drones fly or fry? With two metre-long sparks and millions of volts, it doesn’t look good for the drones. But it doesn’t stop there! An army of engineers marches on set, representing the drone researchers and First Person View (FPV) pilots who will be battling it out in the DroneClash arena next week. 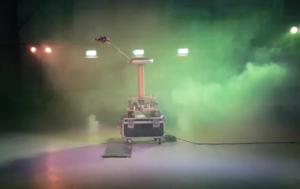 The spate of drone related incidents in recent months, such as that at Gatwick London Airport, show just how disruptive and potentially dangerous drones can be. The need for effective, affordable and scalable counter-drone technology is paramount. This is why the Delft University of Technology is staging DroneClash for the second year in a row. With sponsorship and support from the Dutch Ministry of Defence and the Dutch Police, the event is intended to spark innovations in this important field.

Hallway of Doom, Death and Destruction

During the course of this spectacular competition, drones will attempt to navigate counter-drone measures like the Tesla Coil in the so-called Hallway of Doom, Death and Destruction, before doing battle with each other. The aim is to take down as many drones as possible, and knock out the rival Queen drone. Teams are competing for a prize pot of €50,000.

Tickets are still available for this Saturday’s competition and can be purchased here.