Home / Spinfast: the team with the global solution for rogue drones

Spinfast: the team with the global solution for rogue drones

Spinfast is a team put together by drone-entrepreneur, Martin Bennat. 40-year old Martin is a drone-enthusiast who enjoys nothing more than a challenge. Back in 2017 he set his mind to staging a drone-race. Not in some Dubai desert but in in his own backyard: the north German city of Hannover. 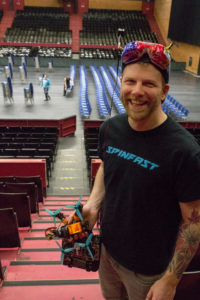 As he embarked on his quest to bring drones to the city, Martin expected an element of resistance. To his surprise, the reaction he got was largely positive. The local authorities embraced the idea of a drone event. The lively “underground” (or should that be “overground”?) drone scene welcomed Martin into their fold. The resulting fair attracted 44 drone companies. It proved to be the launchpad for the business Martin runs today: Spinfast. It’s a marketing and networking platform for individual drone racers and enthusiasts.

The DroneClash Spinfast team brings together an eclectic mix of personalities and skills. First up, there’s the engineer and extrovert of the team, Hannover-based Kay FPV. Secondly, there’s Dennio FPV, from the Netherlands, who describes himself as “a born rebel” and finally, Torpedo Tom, whose name says it all. This energetic German combines top-flight drone-piloting with a love of crazy stunts. When he’s not flying his drone around industrial wastelands, Torpedo Tom can be found on his BMX, riding motor cross or participating in Red Bull races.

Ready to bounce back with Graupner DroneBalls 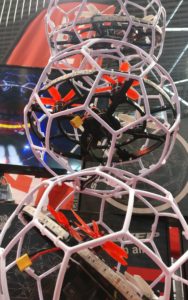 Flying skills are not something team Spinfast lacks. The trio’s YouTube videos make
this clear. But how will they defend against the aggressive attackers of the DroneClash arena? To put something of a spin on in, team Spinfast has what you might call, an all round solution: DroneBalls. These spherical drones, designed by German company Graupner, were conceived as a way to help beginner fliers. A geodesic ball houses the drone and buffers it from impact. In Martin’s words, if it falls from the sky, it simply “bounces a bit.”

The Spinfast team plans to make some (unspecified) modifications to the DroneBalls to get them battle ready. Question is: can they manage to keep all its balls in the air? Time for some crystal ball gazing… 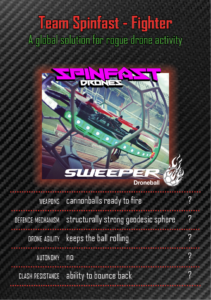 Or alternatively just book tickets to see Spinfast in action at DroneClash on March 16th.