Home / From the Silicon Valley of Switzerland…Team Bluff

From the Silicon Valley of Switzerland…Team Bluff

Switzerland. World-famous for its Alpine landscapes, chocolate, cheese and …. drones.

It may sound surprising that this small landlocked country is something of a world-leader when it comes to drone innovation and technology but it is no anomaly.  World-class universities, an innovation-friendly approach to regulation and a vibrant startup culture, means that there are now more than 70 companies (and counting) working in the field of drone technology. Small wonder that Switzerland is rapidly becoming the place to be if you live in Europe and work in drones!

It is from this so-called Silicon Valley of Robotics, that team Bluff emerges. The team is led by softly-spoken Geoffroy Le Pivain, a graduate of Institute of Technology in Lausanne. By day his team works at drone startup, Flyability. By night they enjoy FPV flying and the technical challenge of designing drones strong enough to endure multiple bouts in the DroneClash arena. 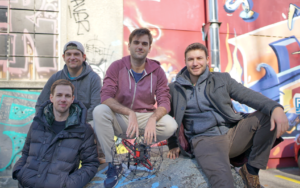 Team Bluff and their Elios drone

The Queen set to reign supreme

Arguably team Bluff has something of a head-start when it comes to durability. You see, the Queen drone they hope will reign supreme is based on Flyability’s own Elios drone. Elios is a spherical drone featuring an external rotating cage which protects the drones’ battery and propellers.  It was specially developed to enter industrial environments too dangerous for humans. Think of gas or oil storage tanks, or the aftermaths of an explosion. 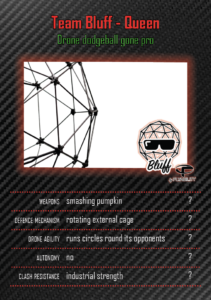 Team Bluff plans to pimp up Elios to make her battle-ready.  But even without these (undisclosed) modifications, it must be said, team Bluff has the makings of something mighty resilient. Take the testing regime Elios has already been through.  Gravel, sharp objects, apples, ping pong balls, beer bottles, you name it…. It has all been chucked her way in the name of endurance testing. Furthermore, ahead of the competition on March 16th, the team plans to simulate the DroneClash experience, by flying a drone into Elios at 50 km/h. All in the name of innovation, of course! 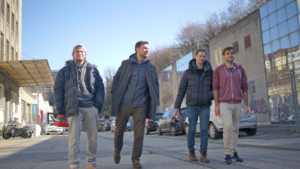 Team Bluff hails from the Silicon Valley of drones in Switzerland

But as we all know, DroneClash does not just come down to defence, it’s also down to the attack. Team Bluff seems confident in their approach. “We’ll bring one or two agile rockets to do the job of the fighters”, Geoffroy tells me casually.

Are they calling my bluff? Come and see how Geoffroy and team-mates perform in the hostile environment of the DroneClash arena on March 16th in Katwijk.